RU
Now you are here:

The Tamgaly (or sometimes also called Tanbaly) “open-air” gallery, named after a Tamgaly river in the southeast part of Chu-Ili Mountains, is located 170km far from Almaty. The complex consists of more than 5.000 petroglyphs (rock carvings) dating from the second half of the second millennium BC to the beginning of the 20th century. The closest settlement is Karabastau village (Almaty oblast, Zhambyl region).

The place was discovered in 1957 by the archaeological expedition of Kazak History & Ethnography Institute during the investigation work of performing the “Archaeological map of Kazakhstan”. In 1958 A.Maksimova archaeologist published the first description of the Tamgaly petroglyphs. The petroglyphs within archaeological landscape of Tamgaly was inscribed on the List of Monuments of History and Culture in 2001, and became a UNESCO World Heritage Site in 2004. It is owned by the State and protected under the Law on the Protection and Use of Historical and Cultural Heritage. The property is a territory of the State Reserve of Tamgaly, a reserve-museum established in 2003.

The most of the paintings are located at a place where the river (now dry) Tamgaly runs out of a small canyon into the valley. The slopes of the hills on both sides of a river seemed to be convenient for rock carving. As many other rock painting places in Kazakhstan and Central Asia, Tamgaly petroglyphs are made by different generations whose settlements and necropolis were found around: the complex of curved stones, burials and altars was used as a cult place for the thousands of years. The oldest carvings were formed during a Bronze Age using a picketing technique with stone or metal tools: most of them include large figures of “sun-headed” and zoomorphic beings dressed in furs (shamans), by one and in groups (involved in ritual dancing), with different attributes like baton, surrounded by animals. Normally, the engravings with ritual scenes can be founded at visible places and are connected with a cult of Sun during the era of shamanism. The same époque is characterized by the images of chariots, horses and hunting scenes. There are few images of a human’s foot and series of erotic episodes dated from the Bronze Age.

The early Iron Age is presented with carvings done in a famous “Skiff-Siberian” animalistic style. These are the images of deer, pigs, goats and other animals in expressive stance. It is also interesting to see some engravings of Turk époque made over the ancient petroglyphs: for instance, a picture of flag-bearer or a kind of well armed “knight of steppes” – the most common depiction of Middle Ages in Kazakhstan. 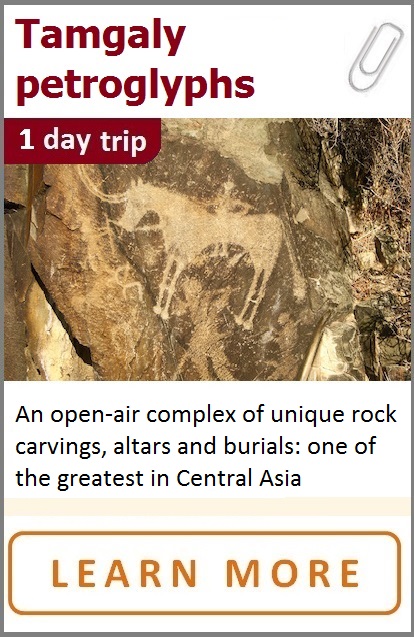